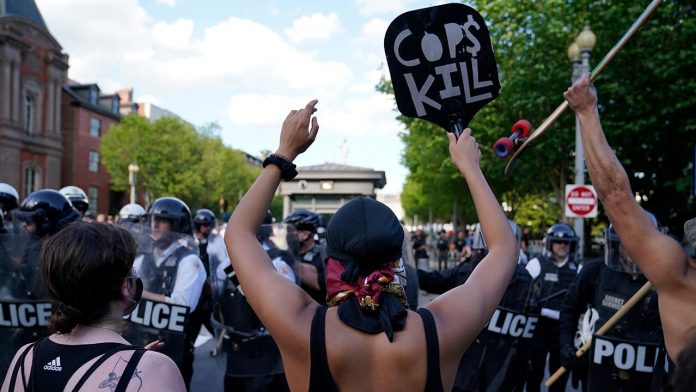 African Americans also spend more time getting to work than any other group, a 2014 University of Chicago study found, since they often live in neighborhoods with fewer jobs and worse transportation links.

Even a person’s name can harm them, according to a 2016 study by University of Toronto and Stanford University researchers, who found that African Americans who attempt to conceal their race on resumes get contacted by employers at more than twice the rate of those who do not.

“I’m definitely at a disadvantage for one, just coming out of college and being a minority,” said Emmanuel Sanchez, a black student approaching the end of his studies who also joined the protests outside the White House.

A host of federal laws prohibit open discrimination, yet many black Americans says they feel bias is part of daily life.

Black Americans make up 13.4 percent of the population but comprise 22.9 percent of Covid-19 deaths, according to the Centre for Disease Control and Prevention.

They also are over-represented in the unemployment rate, which declined overall to 13.4 percent in May but increased slightly to 16.8 percent for African Americans, according to the Labor Department.

And the economy disadvantaged black Americans long before the pandemic. They make 73 cents for every dollar made by white Americans, with a poverty rate two-and-a-half times higher, according to the Economic Policy Institute think tank.