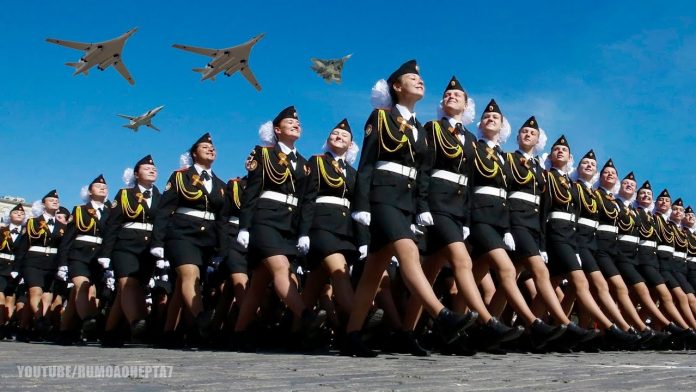 A military parade is about propaganda of fear, creating the illusion that everyone around Russia seeks to undermine and destroy the country.

The Kremlin is interested in making Russians believe in the looming external threat of fascism in order to justify own policy of aggression and influence on voters, who relate to this kind of threat much more than to that of totalitarianism, lack of freedom of speech, fair elections and competition in politics.

This way, the Kremlin strives to unite the country around an authoritarian leader.  This has been widely practiced in N.Korea, China, Iran, Venezuela and other non-democracies.

Moscow festivities are of great geopolitical importance to Russia.

Firstly, this is an attempt to neutralize political consequences of sanctions imposed over the annexation of Crimea and the war Russia has been waging in eastern Ukraine, authors state.

Secondly, this is “an attempt to legitimize representatives of the self-proclaimed puppet republics”.

According to unverified reports, the arrival is also expected of leaders of “LPR” and “DPR” puppet republics, as well as of Transnistria.

Moscow believes that their presence at the event alongside European political leaders will create the appearance of their recognition and set up conditions for their direct personal contact with the heads of European states.

The Kremlin wants to do a PR stunt where European leaders will be seen standing next to those in formal charge of puppet territories.

The relevant footage and pictures are later to be spun via a range of propaganda tools across Europe.