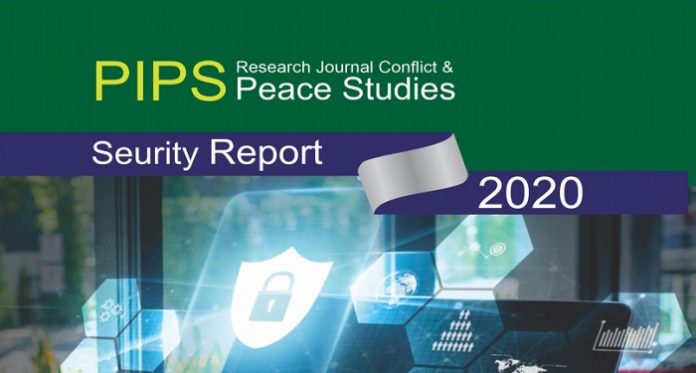 The Tehreek-e-Taliban Pakistan (TTP) and its affiliates remained the major actors of instability in Pakistan in the year 2020.

Report show that total of 67 terrorist attacks, or about 46 per cent of the total reported attacks in merged districts of FATA.

report point out that Out of the total 146 attacks, 95 were perpetrated by religiously inspired militant groups.

Report highlight that 44 attacks by Baloch and Sindhi ethnic insurgents, and seven attacks were sectarian-related.

Overview of Security in 2020

Marking a decline of over 36 percent from the year before, different militant,
nationalist/insurgent and violent sectarian groups perpetrated a total of 146 terrorist
attacks across Pakistan in 2020.

These attacks claimed  in all 220 lives – a decline of 38 percent from those killed in such attacks in 2019– and injured another 547 people.

A distribution of these terrorist attacks by their perpetrators suggests that so-called
religiously inspired militant groups.

As well as other militant groups with similar objectives such as local Taliban groups, perpetrated 95 terrorist attacks – compared to 158 in previous year – which killed 140 people and injured 344 others.

Meanwhile Baloch and Sindhi nationalist insurgent groups carried out 44 attacks – as compared to 57 such attacks in 2019.

As many as seven of the reported terrorist attacks in 2020 were sectarian-related – half from such attacks in the year before – which killed nine people and inflicted injuries on 14 others.

Personnel of security and law enforcement agencies suffered significant casualties
in these attacks including 97 dead and 113 injured.

Similarly, 94 civilians lost their lives and another 372 were wounded in these attacks.

Meanwhile 15 militants were killed and another four were injured, either in suicide blasts or
security forces’ retaliatory fire following some attacks.