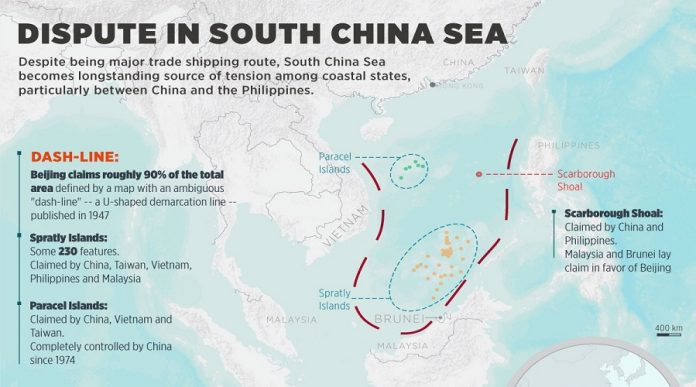 The region became the flashpoint of ongoing tensions between China and the Philippines and the issue is expected to be discussed by the leaders of two countries, Philippines President Rodrigo Duterte’s and his Chinese counterpart Xi Jinping, in a meeting in Beijing on Thursday.

The sea — a crucial passage for a significant portion of the world’s commercial shipping — is bordered by Brunei, Cambodia, China, Indonesia, Malaysia, the Philippines, Singapore, Taiwan, Thailand and Vietnam.

Due to its economic and geostrategic importance, the South China Sea becomes a venue of several complex territorial disputes that have been the cause of political as well as military conflict and tension within the region and throughout the Indo-Pacific.

Spreading over the 3.5 million square kilometers, nearly one-third of the world’s shipping, estimated $11.3 billion worth of trade annually pass through this waterway according to the Center for Strategic and International Studies.

Japan and South Korea heavily rely on the South China Sea as an export route and for their supply of fuels and raw materials.

Around $5.3 trillion worth of trade cruise through the South China Sea annually, with $1.2 trillion of that total accounting for trade with the U.S., said the Washington-based think tank in a report, “How Much Trade Transits the South China Sea?”, published in 2017.

China claims nearly all of the 3.5-million-square-kilometer South China Sea, which is one of the fiercely contested regions in the world.

Beijing claims roughly 90% of the total area defined by a map with an ambiguous “dash-line” — a U-shaped demarcation line — published in 1947.

The Paracel Islands, along with the Spratly group to the south, are located within China’s so-called nine or ten “dash-line”.

China, Taiwan and Vietnam, each claims sovereignty over all the Spartly’s some 230 features, according to Lowy Institute, an Australia-based think-tank.

However, the Philippines claims 53 features and Malaysia claims 12. Vietnam occupies 27 features, followed by China with eight, the Philippines with seven, Malaysia with five, and Taiwan with one, said the institute.

China has been building artificial islands, containing port facilities, military buildings and an airstrip in the Spratly archipelago, a disputed scattering of reefs and islands.

The Paracel Islands are the subject of overlapping claims by China, Vietnam and Taiwan. But the group of islands is completely controlled by Beijing since 1974, the institute said.

However, both the Philippines and China have competing for claims over the Scarborough Shoal, while Malaysia and Brunei laying claim to maritime territory in the sea to assert their sovereignty. The Scarborough Shoal is the scene of ongoing tensions between Beijing and Manila. Since a standoff in 2012, Chinese vessels have de facto controlled the waters around the reef, according to the Australian think-tank.

In 2016, the Permanent Court of Arbitration in The Hague concluded that Beijing’s claims to areas of the resource-rich sea have no legal basis. The arbitration was launched by the Philippines, while China rejected the ruling.

As the disputes over the South China Sea escalated day by day, the global community took several steps to reach a settlement. The UN concluded a law in 1982 due to establish a legal framework to balance the economic and security interest of coastal states.

The United Nations Convention on the Law of the Sea (UNCLOS), which came into force in 1994, enshrines a 200-nautical mile area to extend sole exploitation rights to coastal nations over marine resources.

However, the area, officially called as the Exclusive Economic Zone (EEZ), was never intended to serve as a security zone, and UNCLOS also guarantees wide-ranging passage rights for naval vessels and military aircraft.

Despite being signed and ratified by all concerned countries in the region, the interpretation of UNCLOS in the South China Sea is still fiercely disputed.

Australia’s fossil fuel exports are only behind Russia and Saudi Arabia;...