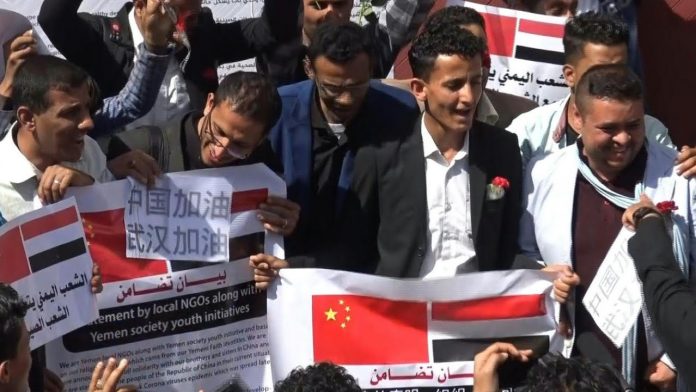 March 22, 2020 marked five years since the conflict in Yemen began. The country has been in turmoil since 2015, when Iran-backed Houthi militia captured a large part of Yemen.

In order to counter Iranian influence, Saudi Arabia along with eight Arab countries launched a campaign intended to restore the original government.

In the course of this past year, the battle front in Yemen has hardly changed. There have been frequent encounters between warring groups as well as aerial offensives by the Saudi-led coalition.

Houthi rebels still hold power over much of the northern part of the country, including the capital, Sanaa.

On the other hand, President Hadi’s government and the South Transitional Council (STC) control the southern part of Yemen. The Stockholm Agreement, signed in 2018[1] was meant to achieve an immediate ceasefire, followed by the withdrawal of armed troops from the port city of Hodeida. Despite this, fighting continues in this area to this day.

While the battlefield vanguard remained largely the same, there was one noticeable difference in the past year. These were the rising tensions between Saudi- backed President Hadi’s forces and the STC – which is backed by the United Arab Emirates.

The November 2019 Riyadh Agreement[2] was signed between the two sides, which accorded power sharing between the north and south of the country and created a governing coalition. However, fighting resumed a few months later, putting the agreement at risk and weakening the anti-Houthi campaign.

On April 9, 2020 the Saudi-led coalition announced a two-week unilateral ceasefire.[3] The announcement merges with the Emirate’s decision to withdraw its troops in June last year and signals that the Saudis want to end their campaign in Yemen.

In response, an official from the Houthi movement stated that his side wanted “a complete cessation of the war and the lifting of the siege once and for all”.[4] He further added that an end to the war was the removal of the siege on Yemen” by the Saudis, implying a full troop withdrawal.

The Saudi-led coalition has said that the ceasefire is in response to the United Nation’s calls for a global stoppage in war due to the Covid-19 pandemic. However, the coronavirus contagion provides an exit strategy for the Saudis out of a costly conflict.

Firstly, their main backer, the UAE, is more focused on its geopolitical objectives which include ascertaining command over Aden and consolidating its influence in the Horn of Africa. Secondly, the Houthis’ increasing ability to strike both military and civilian targets have flustered the public in Saudi Arabia.

in point, the firing of the ballistic missiles over Riyadh in March 2020 notwithstanding years of persistent counter strikes by the Kingdom. Thirdly, the deteriorating domestic situation in Saudi Arabia, especially in the last few weeks has made the Yemen war an undesirable strain on Saudi resources.

With the drop in global demand of oil and the coronavirus pandemic halting all religious tourism, Saudi Arabia cannot afford to engage on unnecessary fronts.

Since 2015, more than 100,000 people have been killed, these include 12,000 civilians. The UN has labelled the conflict as the world’s ‘worst humanitarian disaster’.[5] An estimated 85,000 have died due to famine triggered by the war.[6] The fighting has also obstructed the distribution of aid to a vast number of civilians.

This has resulted in almost 70 percent of the population being categorized as ‘food insecure’.[7] In April 2020, the UN’s World Food Program stated that due to decreased aid from donor countries, it would have to halve its aid to regions under Houthi control.[8] Moreover, it is important to mention that cholera is also prevalent in the country. According to World Health Organization (WHO), suspected cases have exceeded by more than 2 million.

[9] Amidst all this, on April 10, Yemen reported its first case of Covid-19. Both the government and the Houthi authorities have declared steps to inhibit the spread of the virus such as deploying teams of medical staff to respond to an outbreak. However, fighting needs to cease immediately given that 93% of the country’s medical equipment is out of service.[10]

A New Threat on the Horizon:

A threat that poses to put the country into further turmoil comes from the Al-Qaeda in the Arabian Peninsula (AQAP). This organization is considered as Al-Qaeda’s most dangerous affiliate. This terrorist outfit is mostly present in the provinces of Al-Jawf and Marib. AQAP poses a threat to both the government forces as well as the Houthis. On February 23, 2020, the group announced their new leader, Khalid bin Umar Batarfi.[11] The new leader’s religious background implies that the AQAP could be targeting tribal ideologies in Yemen to garner more support.

The Yemen conflict is effectively an immobile conflict. All efforts to determine a peaceful solution have struggled to uphold so far. Moreover, the country is located at the strategic juncture which links the Red Sea with the Gulf of Aden. Most of the world’s oil passes through here. Globalization entails that a domino effect throughout the region is imminent if tensions in Yemen continue, especially during the prevailing pandemic.

[1]       “Full Text of the Stockholm Agreement”, Office of The Special Envoy of the Secretary-General for Yemen, December 13, 2018. https://osesgy.unmissions.org/full-text-stockholm-agreement