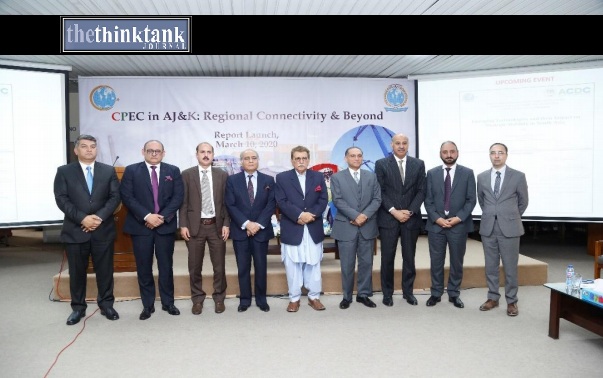 China-Pakistan Study Centre (CPSC) of the Institute of Strategic Studies Islamabad (ISSI) in collaboration with Centre for Peace, Development & Reforms (CPDR) organized Launch of a Report titled “CPEC in Azad Jammu & Kashmir: A Gateway to Regional Connectivity & Beyond”.

Authored by Sabur Ali Sayyed, an Islamabad-based researcher and development practitioner and published by CPDR, the report provides a comprehensive overview of China-Pakistan Economic Corridor (CPEC projects) in Azad Jammu & Kashmir (AJK), including Karot and Kohala hydropower projects, construction of M-4 motorway, and a Special Economic Zone at Mirpur.

Honorable Raja Farooq Haider, Prime Minister of Azad Jammu & Kashmir was the Chief Guest at the occasion. In his introductory remarks, Dr. Talat Shabbir, Director CPSC, commended the author for producing a high-quality report that highlights economic potential of AJK and opportunities for connectivity under the CPEC initiative. He said that the launch of the report is in line with the vision of CPSC, i.e., to facilitate policy dialogue and interaction amongst stakeholders for strengthening Pakistan-China relations.

Ambassador Aizaz Ahmad Chaudhry, Director General ISSI, warmly welcomed the Prime Minister of AJ&K and the guests. Appreciating collaboration between CPSC and CPDR, he thanked Mr. Zulfiqar Abbasi, President CPDR for reaching out and sharing the report. He commended the author for producing a comprehensive report which highlights both prospects and challenges of CPEC projects in AJK region, while underscoring the enormous economic potential of the region. He noted that the report has provided valuable insights and facts which will be helpful for all the relevant stakeholders. Ambassador Chaudhry also underscored importance of Kashmir region for Pakistan, and stated that Government of Pakistan remains committed to the development and prosperity of AJK in spite of tensions with India and budgetary constraints. Thus, when CPEC was launched, it was ensured that projects were set up in this region, as well.

Mr. Sabur Ali Sayyid, author of the report, highlighted key takeaways from his research. He provided an overview of the on-going CPEC projects in the AJK region. He shared the current status of progress on CPEC projects in AJK, and challenges being confronted by the government and people. According to his estimate, AJK will earn more than Rs. 2 billion per annum after construction of Kohala hydropower project. Moreover, setting up of a Special Economic Zone (SEZ) at Mirpur will provide a strong industrial base to the region, and orient it towards an exporting economy.

This will be complimented by M-4 motorway project, shortening the distance between the cities of Central Punjab and AJK districts. He underscored that AJK can emerge as a well-connected and developed region in Pakistan, provided the projects are completed timely and not allowed to fall victim to vested interests and politicization. He recommended that focus should now be on advocacy of CPEC, non-politicization, and addressing concerns of local communities related to the projects.

Mr. Zukfiqar Abbasi, President CPDR, thanked ISSI and CPSC for organizing the launch of the report. He commended Mr. Sabur Ali Sayyid for producing an important report which is informing policy discourse. He called for more research studies that explore various dimensions of economic development in AJK. Commenting on the status of on-going CPEC projects in AJK region, he underscored that CPEC projects have the potential to uplift socio-economic conditions of the people of Kashmir. CPEC offers an opportunity to link AJK with the outside world and utilize indigenous resources to attain self-reliance and sustainability. For long-term development, however, Federal and AJK governments should take people of this region on-board the planning process. Similarly, business community of the region is keen to be part of these projects, and their suggestions will go a long way towards optimizing the economic potential of AJK region.

Dr. Syed Asif Hussain, Additional Chief Secretary Government of AJK, thanked CPSC and CPDR for giving him an opportunity to address the launch of the report. He shared current progress and efforts being made by the AJK government to address hurdles in the projects. He noted that four projects were sanctioned under CPEC for AJK. Two of them are energy projects, one road, and one Special Economic Zone (SEZ). For implementation of these projects, authorities in AJK have maintained close coordination with the Federal , Punjab, and KPK governments, and Chinese companies leading the projects. This has led to fast track work on the two energy projects, while the road project is also in progress. He shared that AJK government is also cognizant of the environmental challenges to the local ecology, and efforts are underway to ensure environmentally sustainable project designs.

Mr. Hasan Daud Butt, CEO KP Board of Investment and Trade, commenting on the report, lauded the author for carrying out this timely research and producing a cogent report. He underlined that this reflected the level of commitment towards understanding and promoting CPEC initiative. He opined that when implemented, CPEC projects in AJK will boost economic activity well beyond their geographical location. On construction of SEZ, he specifically advised AJK government to first identify specific industries that could be set up in Mirpur. For this purpose, a dialogue with local industry and Chamber of Commerce should be opened. Feasibility studies are critical for success of SEZ and since CPEC is a long-term initiative, the government should ensure that interests of local people, business community, and the region are protected.

Addressing the launch, Honorable Raja Farooq Haider, Prime Minister of Azad Kashmir, lauded CPDR for bringing out a pioneer research study and commended ISSI for hosting its launch. He underscored that CPEC being a long-term project has the potential of being a true game-changer for AJK region, and such studies are crucial for taking forward the process of development. He underlined that when discussing development projects, particularly those of the scale of CPEC projects in AJK, it is crucial to have relevant stakeholders on board and we should also benefit from subject specialists.

The Prime Minister highlighted key socio-development indicators of the AJK region and the work being undertaken by the government to improve education standards and provision of quality healthcare in the region. He noted that CPEC will supplement AJK’s socio-economic development, as tremendous human capital of AJK is its biggest asset. He assured that AJK government is making all efforts to ensure that CPEC projects in the region are implemented without any delays. In this regard, it is maintaining close coordination with federal and provincial governments and the Chinese side.

Ambassador Khalid Mahmood, Chairman ISSI Board of Governors, delivering his vote of thanks highlighted that for decades, Pakistan has looked at Kashmir through the security lens and now CPEC is leading economic development in the region. This has broadened the conversation in the AJK region, which is a positive contribution. Under the CPEC framework, focus is on energy, connectivity and industrial growth. The initiation of such projects is essential for development and prosperity in the region. However, there is always a possibility of certain challenges that can hinder the implementation of projects of this magnitude. Nonetheless, importance of CPEC for socio-economic development of AJK region cannot be understated.